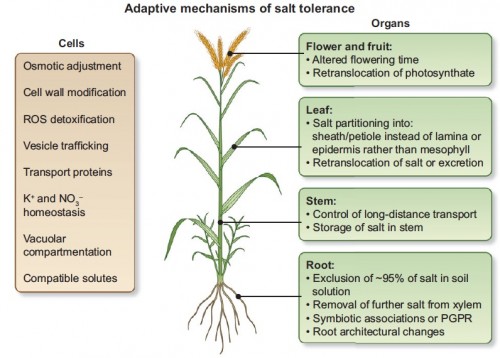 Our work in this area has received considerable attention. In collaboration with Prof Mark Tester, were the first to directly show that HKT (high-affinity potassium transporter) proteins transport Na in planta, by using patch-clamp electrophysiology. We directed overexpression of AtHKT1;1 specifically in stelar cells surrounding the xylem, and went on to show that Na concentration first increased in these cells, then in all root cells over time. We confirmed that HKT1 can retrieve Na from the xylem, and in doing made plants more salt-tolerant. This work received coverage by others including, ‘In Brief’ (The Plant Cell 21: 1875), ‘Editor’s Choice’ (Science 325, p 518), and was ‘recommended’ by F1000 (http://f1000.com/1164244), which stated that our work ‘provides experimental evidence that stelar-targeted overexpression of HKT transporters provides a potentially powerful tool for engineering a quantitative increase in the salt tolerance of plants’.
We have extended this work to food crops and have demonstrated that increased expression of HKT1 reduces shoot Na content under saline conditions in rice, with a resultant increase in vegetative biomass. More recently we collaborated with Rana Munns’s group, in a large multidisciplinary study, where we demonstrated that introgression of HKT1;5 from an ancestral cousin of modern wheat (Triticum monococcum) into durum wheat increased grain yield in the field by 25% over the parental variety under saline conditions. This paper is listed as ‘recommended’ by F1000 (http://f1000.com/714247954) ‘research led by the laboratories of Rana Munns and Matthew Gilliham has now demonstrated improved yield in wheat grown at field sites with elevated salt levels, whereas no yield penalty was observed under non-salt stress conditions’. Grain has been distributed to a number of countries for introgression into locally adapted germplasm including India, Bangladesh, Pakistan, Ethiopia, Tunisia, USA, France and the Ukraine. For more on this paper see here. This work demonstrates the power of natural variation for finding genes responsible for particular traits. It also shows that genes no longer present in modern cereal germplasm, having been lost through the process of domestication, can be a potent source for improving the stress tolerance of modern elite crop varieties; such genes may be introduced via conventional breeding, as in this study, or by modern genetic modification.

We have also shown that anion loading of the xylem is conferred by at least two ion channel proteins that are expressed on the plasma membrane of stelar cells and these are both chloride- and nitrate-permeable. We revealed that an ABA-mediated pathway, which increases cytosolic Ca concentration during abiotic stress, reduces the activity of these proteins and consequently the rate of anion loading of theshoot. We showed for the first time that ABA stimulates a plasma membrane hyperpolarisation-activated Ca-permeable channel in the stele of maize, and that this is the likely source for the rise in cytosolic Ca. We followed this by confirming that NaCl-induced rises in cytosolic Ca are due to influx from multiple sources, including Ca-permeable channels on the plasma membrane that are hyperpolarisation- and depolarisation-activated, and intracellular sources stimulated by Inositol trisphosphate.