Our lab sows a new crop of Tall Poppies

Our lab sows a new crop of Tall Poppies

Well done to you both on a much deserved award. 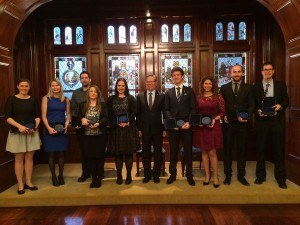 Since leaving our lab, where he made breakthroughs in the mechanism and role of cell specific ion accumulation, Dr Conn has been successfully engaged in the biomedical research area. Most recently he has been studying the origin of circular RNA in mammalian systems at the University of South Australia culminating in a Cell paper. He has recently been appointed into a group leader position at the EMBL institute in Grenoble, France.

Dr Byrt’s research highlights have included the discovery of two genes underling salt tolerance in wheat. Her work demonstrated that the proteins coded for by these genes help to prevent toxic build up of sodium in leaves. This work includes several highly cited papers in Nature Biotechnology, Plant Physiology and the Plant Journal.

Dr Byrt will continue her work as a DECRA fellow in our lab in collaboration with the ARC Centre of Excellence in Cell Walls.